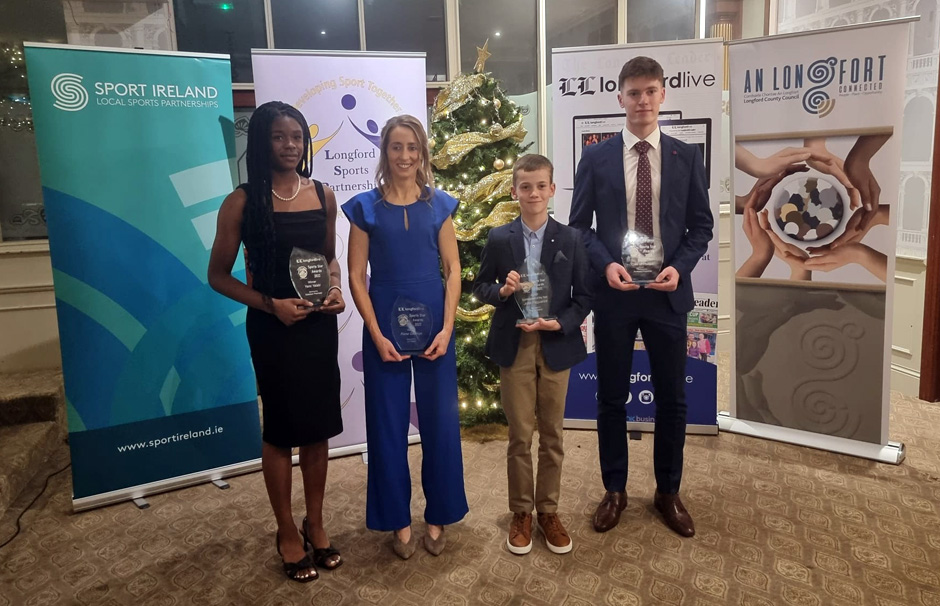 Cross Country
Garryann in Co. Cork hosted the All Ireland Uneven Ages Championships on Sunday with 12 Longford athletes taking part. The Under-11 girls team of Jessica Neary, Zoe Mulligan, Julie Taitt and Hollie Smith packed well to all place in the top half of the 172 finishers after the 1500m for ninth in the team standings. Running brilliantly and well inside the top ten of the U13 girls 2500m, Sophia Carey had the misfortune of a shoe falling off in the mud and was unable to finish. Darcey Brady and Sarah Taitt both ran strongly on the energy-sapping course.

The boys U13 team of Rian McCaffrey, Timothy Sheridan, Odhran Crossan and Daniel Higgins also gave it their all with good runs over 2500m. Following a bout of flu in the past two weeks, Connacht U15 champion Emma Brennan was unable to run to her best but still showed her strength to finish the 3500m well placed overall.

Longford Leader Sports Awards
Congratulations to Yemi Talabi, Fiona Gettings, John Fitzpatrick and Cian McPhillips who were recognised at the Longford Leader Sports Awards in association with Longford Sports Partnership last Friday. Yemi, Cian and Fiona were included in the list of ten recipients of a Sports Star award while 11-year-old John was named as the Junior Sportsperson winner. Congratulations to Cian who was named as the overall Sport Star award winner.

AGM
The Annual General Meeting of Longford Athletics Club will take place on Sunday December 11 at 5.30pm in the indoor centre. All adult members and parents of juvenile members are welcome. Come along and hear of all that has been achieved by the club and its members in 2022. We also encourage new members to join us on the committee as new ideas, skills and interests are always welcome. We extend this invite for nominations of positions on the committee and such nominations are to be sent to longfordac@gmail.com before December 9.