Double Gold for Longford Athletes at Community Games Finals
There was brilliant gold medal success for County Longford athletes Emma Brennan and Joe Rooney at the Community Games National finals in Carlow on Saturday.
Emma Brennan, of Drumlish/Ballinamuck, executed a perfectly paced 800 metres to claim victory in the Under-14 girls event in a new personal best time of 2:22. In the very hot conditions, Emma moved into first place past Cork’s Rachel Ledwith approaching the final bend before finishing strongly for the win at the end of the two-lap race. 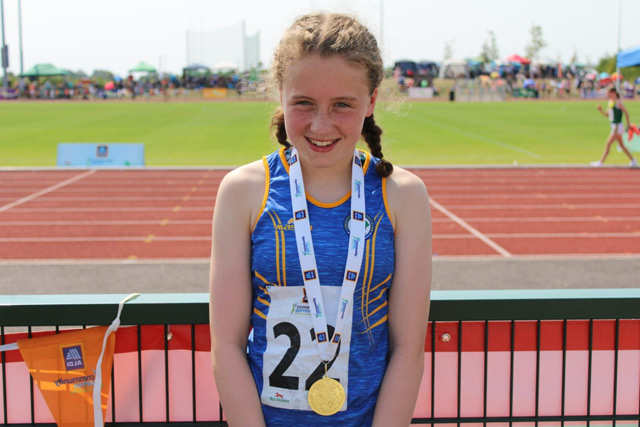 Emma with her gold medal

Further National success for Longford came when Mostrim’s Joe Rooney sprinted to gold in the boys Under-8 60 metres. Joe showed quick feet after a superb start and was the clear winner crossing the line first with his terrific run. He was soon greeted and congratulated by fellow Edgeworthstown native Jimmy Connell who was the event MC.

El’Nathan Okoh, of Longford South, was the county’s other top-four performer. He claimed a fourth place finisher’s medal for his fast run in the Under-12 boys 200 metres.

Having qualified from the Regional finals held recently in Clones, a number of other athletes from the county took part at Saturday’s finals held at the impressive SETU Carlow sports campus. Many excellent performances were recorded, with some narrowly missing out on the medals, on a testing day for competing in such high temperatures. 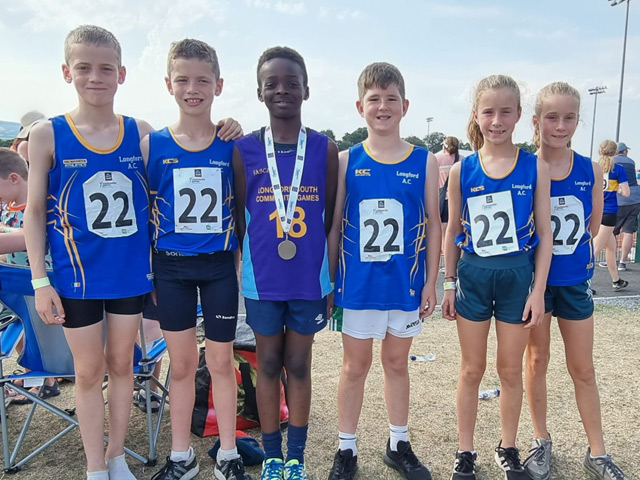 National Masters
The National Masters Track and Field Championships took place in Tullamore with two medals achieved by Longford Athletics Club members. Fiona Gettings won silver in the F40 3000 metres clocking an excellent 10:28 in the very warm conditions. Following her good results in road races of late, Fiona ran strongly on her track debut and continues to excel having performed with distinction on the GAA fields over many years.

Peter Duffy won gold in the M75 5000 metres race walk. The temperatures, along with the twelve-and-a-half laps, provided a true test of stamina but Peter stuck to the task to claim the age category win.

Congratulations to all Longford medallists and well done to all that competed in Carlow and Tullamore in such hot temperatures.

Longford Trail Series
The Longford Trail Run series of 5km events continues on Wednesday 17 August at 7.30pm with Derrycassin Woods the venue. Following this, the remaining evening will be Newcastle Woods on 24 August. Registration is open at the MyRunResults website with further information on the Longford Sports Partnership Facebook page.

Results Roundup
The second evening of the series saw 123 participants for the Corlea Bog 5k in very warm conditions last Wednesday. Plenty of good performances by club members including juvenile athlete Rachel Keenan as leading female finisher in 20:14. John Scott made the trip over to the Isle of Man to take in the marathon on Sunday and put in another strong run over the distance for ninth place in 3:01. Seamus Murtagh proved himself to be an Ironman in Cork on Sunday at the 140.6 event in completing the 2.4 mile swim, 112 mile bike and 26.2 mile run. Well done all.