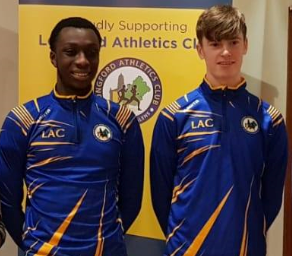 Double Silver: Congratulations to Cian McPhillips and Nelvin Appiah who both won silver medals at the National Senior Track & Field Championships on Sunday. Having won his heat, Cian lined up in the 800m final full of confidence. After a relatively slow opening lap, the pace upped considerably in the final 300m with Cian moving up a place into second coming around the last bend and finished strongly in 1:52.78 just behind winner Harry Purcell (Trim AC). Nelvin’s second place in the 110m hurdles final was a great achievement in an event he would be somewhat inexperienced in. He clocked a time of 14.77 and this sets him up well for a good showing at the National Juniors this coming Saturday. Congratulations also to the lads’ coaches – Cian’s coach Joe Ryan and Nelvin’s coach Dermot McDermott.

Also on Sunday, Aaron Kelly produced another personal best run this time in the 200m. Aaron crossed the line in 5th place in his heat with a time of 23.53. Well done to the three lads who represented the club with great distinction over the past two weekends.

Juvenile Training: Weekly training for juvenile members, born in or before 2010, will return on Friday 11th September at 7pm on the astro pitch at the Mall. Sessions will be structured in line with the new AAI/Sports Ireland guidelines. An email has been sent to parents with regards to the return of juvenile training. Parents should message pro.longfordac@gmail.com if they have not received the email. Regrettably, Little Athletics (for children born in or after 2011) will not return in September. Due to the restrictions set by the guidelines, we would not be able to ensure the coaching of the fundamentals of athletics in a fun and safe environment. We will review this again in January.

Results: Some senior club members were in action in both the real and virtual world last week. Juraj Karcak took on the Hardman Killarney event on Saturday over the Ironman distance finishing in 12 hours 20 minutes. Gary Brady ran the East Galway AC 5k on Saturday in 18:15 and Paddy Sharkey topped the national leaderboard for the Irish Runner Virtual 10 mile challenge in 56:49. Well done lads. Good luck to Paddy and Donal competing at the National Masters this Sunday.