Thomas Mc Gann continued his excellent early season form by winning the silver medal in the junior boys 100 meters final at the Irish Schools Track & Field Championships held on Saturday 01st June in Tullamore on a glorious day for Irish Schools Athletics.  Thomas representing Ballymahon Vocational School had won the North Connaught and Connaught Schools finals back in May and he was up against it with qualifiers from both Leinster and Munster having ran much quicker in their respective provincial finals but Thomas was not over awed by this and give a top class performance in finishing second in a time of 11.83 seconds, just 0.01 seconds from the gold medal, infact it took the photo finish to separate them.  The Irish schools finals are so competitive and bring out the best in the competitors and Thomas certainly shone on this occasion. Thomas has had an excellent season so far and now looks forward to the remainder of the outdoor season where again he will be challenging for medals. 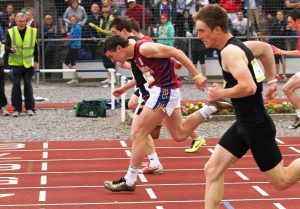