Longford AC Juvenile athletes did the club proud with their stellar performances at the Athletics Ireland National Indoor Championships on March 22 & 23 at the AIT International Arena. Top honours went to Cian McPhillips winning the gold medal in the U13 Boys 600m race by  20 metres, a full second ahead of his nearest opponent. Cian’s time of 1.39.78 fell agonisingly short of the U13 record of 1.39.32 making him the athlete to watch for the upcoming outdoor track & field season. As the defending champion, the pressure was on him and a slow start added to the tension. By the end of the first lap he had himself in 2nd position and remained there to the bell for the last lap where he suddenly injected a kick and opened up a 10 metre lead in a few strides going on to win comfortably. Sarah Murphy was competing in her first All Ireland Indoors and went into the U 13 600m race as the Connaught silver medallist. She finished in 7thplace with a new personal best time of 1.51.84, showing excellent improvement on her Connaught time. The pace in this race was ferocious and Sarah remained in medal contention right up to the 500m mark. Her performance was full of promise and she can look forward to the outdoor season with renewed confidence. Brendan Finnan swapped his turbo javelin where he has the longest throw in Ireland for the under 12 boys High Jump. He finished in 7th place overall achieving a new personal best when he cleared the height of 1.25m. This was the same height cleared by the fifth placed athlete but Brendan lost out on count back. Newest club member Niall Moran was the only Longford AC competitor at Day 2 in the U14 Boys Long Jump. It’s hard going into your first All Ireland but being the only club competitor makes it much more difficult. He had already recorded a jump of 4.21m to win Bronze in Connaught but was unable to repeat this distance in his three jumps. His first jump had excellent distance but he inadvertently brought his hand back in landing and lost up to a metre. However he will have learned a great deal form his experience and should get another chance in the All Ireland outdoor in the Summer.  This week end brought an end to a very successful indoor season for the club juveniles with lots of new PB’s, great performances, a few near misses and everyone looking forward to the outdoor season in the coming weeks. 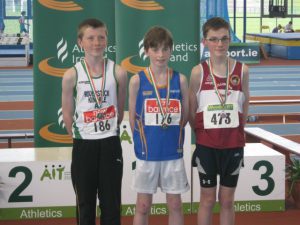 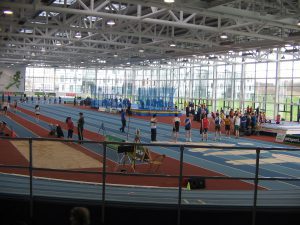