According to Athletics Ireland it was a ‘record breaking day’ as 240 Relay teams in the U12-19 age group competed in the Irish Life Health National Juvenile Outdoor Relay Championships and smashed nine records at a single event.  The standard of competition rose significantly as six new Boys Relay records and three for U17-19 Girls were all achieved at Athlone IT’s outdoor track.

Clubs travelled to Athlone IT from all corners of the country bringing their top sprinters to the annual event full of expectation to improve their Provincial times and vie for national medals. The Programme for the day saw a total of 22 races, Uneven Ages, U13, U15, U17, and U19 in the morning session and Even Ages on in the afternoon. Longford Athletics Club had seven teams in this year’s competition who all returned home wiser for the experience but empty handed.

Dundrum South Dublin AC absolutely ripped up the track in the U17 and U18 Girls and Boys 4X400m Relay events setting a very impressive three new records.  Unfortunately for Longford Leevale AC , Cork, dominated in the U16 and U17 Boys 4 X100m races shaving off precious milliseconds and getting their names firmly on the Record list in both.

To their credit all seven Longford AC teams ran very smoothly, had no errors on baton hand overs and all came away with new pbs as they improved their times at this outing at National level. Credit goes to Funmi Talabi, Laura Farrell, Killian Rawle, Cian Nolan and Nelvin Appiah who were all on double duty running on two teams each as numbers were very tight with 23 juveniles going forward to make the seven teams. 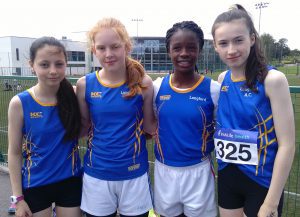 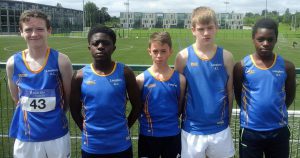 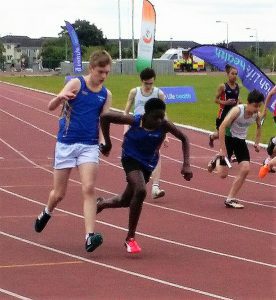 Baton change between Longford AC teammates Joe Reilly and Nevelone Dampare in the U15 Boys 4X100m race at the Athletics Ireland National Relay Championships, July 2017 at Athlone IT. A total of 22 events were on the Programme for the U12-U19 juvenile age group.