The Connacht Secondary Schools’ Combined Events on 26th October was Nelvin’s first opportunity to put all 5 pentathlon events together in competition on a single day. The programme was 60m Hurdles, 200m, shot putt, long jump and 800m. He brought determination with his natural ability and speed and easily conquered this new challenge, winning Provincial Gold in his age category.

The 15 year old from Longford town has had a very exciting first year as a member of Longford Athletics Club. Since joining the Club in January he has won 8 Provincial Gold medals which led to two 4th places finishes in All-Ireland Indoor Track & Field in March, and his 1st Athletics Ireland National medal, Bronze in U16 relay. Over the summer Nelvin was in action in Tullamore at the Athletics Ireland National Outdoor T&F winning his second All-Ireland medal, Gold in the U16 Boys High Jump which earned him his 1st international cap being selected for the Celtic Games in Swansea, Wales last August.

Athletics Ireland’s Juvenile Committee selects the best up and coming U16 and U18 athletes for the annual Celtic Games and Nelvin delivered on the day winning Silver in the U16 Boys High Jump. Earlier in the summer, based on his end of year schools athletics performance, Nelvin was also selected for the Tailteann Games, in Santry.

No doubt there will be a large crowd of supporters from both Moyne Community School and Longford AC when Nelvin competes for Ireland on Saturday 10th December at the Athlone IT International Arena. 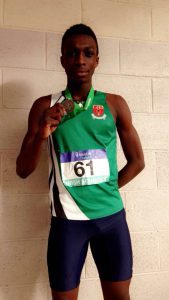 Congratulations to Longford AC juvenile Nelvin Appiah on his excellent performance at the All-Ireland Secondary Schools Combined Events on Nov 12th, 2016 at the AIT International Arena. He won Bronze in the Junior Boys pentathlon after narrowly missing 2nd place by only 2 points! Nelvin has earned his 2nd international appearance as he will take part in the schools international in December. 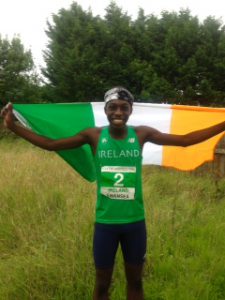 Longford AC Juvenile member Nelvin Appiah was selected by the Athletics Ireland Juvenile Committee to compete in the Celtic Games in Swansea, Wales over the summer. Still only 14 years of age he won Silver in his first international athletics appearance in the U16 Boys high jump at 1.79m. He is pictured here in his new Ireland gear after returning home from the competition.