Longford AC had a very busy weekend at the GloHealth Athletics Ireland National Indoor Championships March 21-22 at AIT International Arena. On Day 1 our juveniles were out in full force with 20 athletes taking part in the Relays. U12 Girls Sarah, Aideen, Melissa & Funmi finished 9th overall with a time of 60.03. U13 Boys Cathal, David, Brendan & Rory improved on their Connacht time, and with continued work they will be ready for the outdoor season. U14 Boys Cian McP, Daire, Adam & Brendan were the only Longford AC team to make it through the heats to run in the final. The length and speed of the 4 X 200m is a big step-up for this young team and they did us proud on the day. The U15 team of Cian N, Cian B, Cian McP & Niall experienced total devastation when their medal winning performance was disqualified due to stepping outside the zone during a hand over phase. There is no doubt that the team will learn from this and bounce back in June at the Connacht Outdoor Track & Field Championships. Unfortunately the U16 team, Corey, Aaron, Cian N & Cian B, were also served a harsh lesson. Changing the order of runners that morning upset their usual smooth performance and it cost this very fast team their shot at a set of National medals. It is an achievement in itself to compete at National level and represent not only Longford but Connacht as well. Well done to all the athletes and thanks to the parents and families that gave great support over the entire weekend.

We had 3 juvenile athletes competing in field events over the weekend of competition. Sean McMauns had a new pb 9.29m in U17 Shot Putt. Brendan Finnan also notched up a new pb in U13 High Jump getting over 1.30m. Brendan was also at Long Jump gaining more experience in this technical event. Tommy Corcoran had 3 throws all over 6m in the U12 Boys Shot Putt.

Cian Mc Phillips running in the singlet of Longford Athletic Club retained his All Ireland Indoor Under 14 800m title in impressive fashion on Saturday last in the GloHealth National Indoor Juvenile Championships staged once again in the impressive International Arena in Athlone Institute of Technology. Fourteen athletes lined up at the start of the race, all medalists from the Dublin region plus the four provinces. This was a very large number on the tight indoor track and inevitably led to lots of jostling as the gun went off. Cian being one of the smaller athletes found himself near the back of the large field but gradually worked his way through the field to lie on the shoulders of the two leaders at 200m. That first 200m was run in a blistering 30 seconds and the field had already been strung out. Cian remained in third place playing a waiting game and knowing that he was well positioned to cover any attacks off the front. As the bell rung to signal the final lap, he attacked and quickly opened a 20 m lead. With 100m to go and the gap extending, he was able to round the final bend and enjoy the final 50 m to the line knowing that the gold medal and national title was secure for another year in a winning time of 2.16.66 seconds. This was a fitting conclusion for Longford AC who has 22 athletes compete in the Glohealth National Indoor Championships over the last two weekends in Athlone. If lady luck had smiled a little more benignly the previous weekend, Longford’s medal haul would have undoubtedly been greater. All the athletes turn their attention to the outdoor season which is about to begin and look forward to the Connaught championships in June. 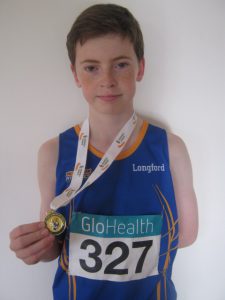