Congratulations to Cian McPhilips, Daire Mcmanus and Thomas McGann on their outstanding performances in the National Indoor Track and Field Championships at the weekend. Longford County Athletic Club had three participants last weekend at the new Athlone IT venue. Juvenile athletics took a much deserved leap onto the national stage honours list with fantastic performances by each of the boys. 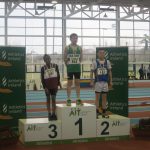 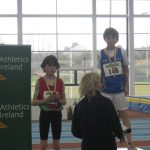 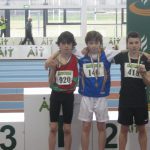 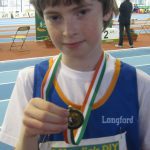 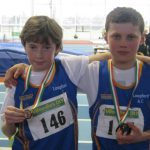 The day started well with Cian McPhillips in the morning when he won a straight Under 12, 600 meters final. Cian has managed to carry his cross country form of the winter onto the track.

In the afternoon the sprints brought Daire McManus confirmed his sprinting quality from National Community Games last season of  his silver medal in Athlone last August and his current Connaught Indoor title.

Thomas McGann showed great potential for the future at his first nationals picking up 4th in the boys Under 16 60 meters and 6th in the 200 meters. Thomas continued his excellent form from the extremely competitive Connaught championships where the first two athletes across the line in the nationals in the 200 meters were from Connaught.

Congratulations to all involved and we wish them a well deserved rest ahead of the busy outdoor season this summer.