The track at the Athlone Institute of Technology was the venue for day one of the Connaught Juvenile Track & Field Championships and the Longford Athletic Club athletes put in some top class performances on the hottest day of the year so far and drew some excellent praise from near and far.  Athletes were competing all day from the first to the last event with the under 9’s to under 11’s competing in pairs and the under 12’s as individuals.  Recently the club has been gathering a well-earned reputation for the performances of the club relay teams competing and this was again the case.  The Connaught championships are based on times with the fastest going through to national finals.  First up on the track were the girls under 10 relay team of Aideeen Mulligan, Sarah Mc Phillips, Claragh Shannon and Fummi Talabi who put in an excellent performance in winning their heat comfortably and getting the overall bronze medal and qualifying for the National Finals.  No doubt had this team being drawn in the second stronger heat the medal colour might have been different and these girls will improve with time.  The boys under 12 team were next up and they carried some form into these championships having already picked up bronze in the equivalent indoor championships back in March. The team consisted of Cian Mc Phillips, Daire McManus, Keelin Mc Gann and Brendan Finane and they ran away winning their heat with some considerable ease and posting the second fastest time of the day and picking up the silver medal and just missed the gold medal by 0.19 seconds, again they were in the easier heat which did not serve them any purpose on this occasion.  No doubt they will continue to improve and should be the first Connaught team home in the National finals in July.  The boys under 11 team ran really well and just missed out on the medals and they will be back again next year much stronger.  Unfortunately the girls under 12 did not have a team as one of the athletes had an injury and these are a good squad for the future.  Cian Mc Phillips proved yet again why he is the National Champion in the boys under 12 600 meters where he was one of the biggest winners on the day, Cian ran the race from start to finish in front and the gap just widened as the race progressed and was probably the most impressive champion on the day.  He certainly left all the other athletes in the shade on this glorious sunny day.  Not to be outdone was Daire Mc Manus who carried his excellent form into the under 12 boys 60 meter sprint.  Daire is the current Connaught Indoor champion over this distance and national silver medallist and proved yet again the class act he is winning the Connaught championship with ease, we will see more of Daire during the summer on the national stage.  The club were well present in the pair’s competition and Brendan Finane and Adam Reilly combined really well to win the gold medal in the boys under 11 turbo javelin and look like good prospects for the national finals.  Next up again was Brendan and this time he paired with Cathal Farrell to win the bronze medal in the under 11 boys 600m meters and both boys can be well satisfied with their performances.  Brendan is an excellent all round athlete and had a fine medal collection at the end of the day.  Yemi Tabali won her heat in the under 12 60 meters and finished fourth in the final, an excellent achievement.  All the other athletes performed really well on the day and the benefits of regular training were seen.  A number just missed out on the national finals and the associated Connaught medals and will be very much contenders in the next couple of years as there is a great group of athletes in these ages groups. The club was very proud of your performances on Saturday. Padraig and Ray worked hard throughout the day as Connaught officials so thanks to them.  The club coaches and parents were kept busy and we hope you all had a good day.  The club wishes the qualifying athletes the best in the national finals and no doubt we will see some top class performance from our juveniles on the national stage and fittingly where better to put in personal best performances. 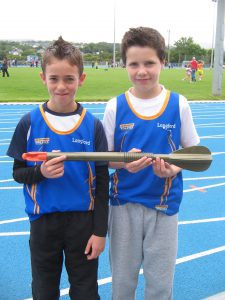 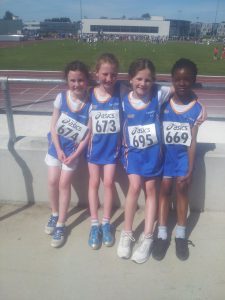 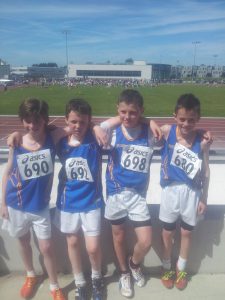