Over 600 young athletes (U12-U19) from all across the country competed at the Athletics Ireland National Juvenile Relay Championships at the Tullamore Harrier’s Stadium on Saturday 5th July. All the teams had already qualified from Regional competitions, setting a high standard of competition with every club battling for a national title. As the reigning Connacht Champions Longford AC’s U13 Boys team of Adam Shields, David McDonnell, Daire McManus, Cian McPhillips and sub Brendan Finnan went into the championship strongly placed and had their sights set on bringing home All-Ireland medals.

The boys ran like clockwork in their heat finishing 1st and securing a place in the final 8. However a technical fault required re-running their heat which was an unexpected burden on the team. They rose to the occasion and again finished 1st in the re-run of their heat. The U13 Boys final was pushed back to give all the teams abit more recovery time. Longford ran well with all change over going smoothly and finished 4th in a time of 0:55.06 with only 0.05 second separating them from the Bronze medalists Letterkenny.

Young athletes from Longford AC will all be returning to Tullamore in the coming weeks to compete in individual events both on the track and in the field.

Day 2 of the prestigious Athletics Ireland National Juvenile Championships 2014 gave 4 young athletes from Longford AC the opportunity to experience competition at All-Ireland level. A total of 11 events were going on in both track and field throughout the day, including pole vault, hammer, discus, hurdles and steeplechase, giving a great display of all that athletics can achieve. Niall Moran and Brendan Finnan both competed in Long Jump. On this occasion they found it difficult to duplicate their winning Connacht jumps so they were content to take away some of the technical points from this field event. Brendan also achieved a new personal best in the turbo javelin, recording a throw of 25.15m to finish 5th in the U12 boys event. Yemi Talabi and Daire McManus represented Longford AC in the U13 80m sprints. Yemi ran well in the strongest heat finishing 6th at 11:41 seconds, just outside the time to qualify for the final. Daire led his heat with a time of 10:81 seconds and qualified for the final. There were problems with the starting gun throughout the sprint heats that led to many false starts and disqualifications which was very unnerving for athletes and supporters alike. This never phased Daire who finished 4th from a very strong field in the boys U13 final. Daire felt he didn’t get an optimal start in the final which highlighted how difficult the transition to using starting blocks during the U13 year can be for a young athlete. The athletes, coaches and parents can be very proud of their achievements to date in 2014 and bring away the finer points for improvement. There are still 2 more days of National competition and Longford AC will be competing again on July 26th. 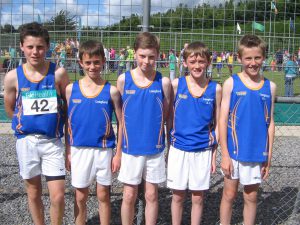