For the first time in many many years Longford entered a men’s team of 4 in the National Intermediate Men’s 8K race.  Barry Sheil worked this way through the pack and was first over the line for Longford in a very fast 10th place. Teammates Declan Newman, Paddy Sharkey and Kevin Ward were evenly matched and worked very well together throughout the race finishing 53rd, 57th and 60th places respectively in a field of 88 runners.  Their combined performance saw the ranked 8th in the team results on a score of 180.

Adrianna Melia ran the Intermediate Women’s 5K with a very impressive 6th place finish in a field of 53 runners.  Spectators are getting used to seeing the sole blue Longford singlet at the starting line as this is the 3rd consecutive year of highly competitive cross country for Adrianna. December 2014 saw her finish 5th place out of 133 in the National Novice Women’s 4K in Santry. She improved that in December 2015 with her All-Ireland Bronze finish in the National Novice Women’s 4K in Dungarvan . As a Novice medallist she moved up to Intermediate this year and the longer 5K race.

Cross country racing is always a genuine test of fitness and stamina. It’s not about ‘the time’ as weather and the hilly, muddy conditions of the course are so changeable that every race is different.  Credit is due to the brave few Seniors that took the challenge on the cross country course to add to their overall fitness and stamina. 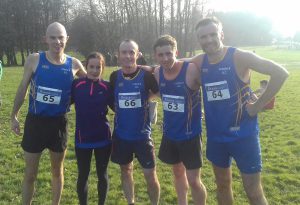 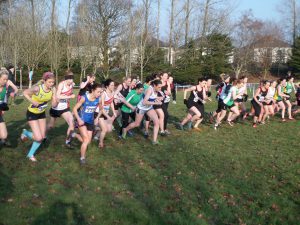 Adrianna Melia, wearing the only blue Longford AC vest in the race, gets away quickly at the start of the Women’s 5K race at the 2017 Irish Life Health National Intermediate Cross Country Championships in Tuam, Co. Galway. She had an impressive 6th place finish on the challenging hilly course.