Day 1 of the Athletics Ireland National Track & Field Championships got under way in Tullamore Harriers Stadium last Saturday. All competitors have to be in the top four in their provincial championships in order to qualify to compete in the national showcase. This means that the very best juvenile athletes in the country were on show with the resultant setting of new national records and many exceptional performances in the field events and on the track.

Longford Athletics Club had Yemi Talabi competing in the U16 Girls’ Long Jump. After fouling her first jump, Yemi was under pressure to deliver a solid second and third jump. This she did but was a little below her usual high standards and failed to make the final eight jumpers who qualified for a further three jumps. However Yemi who just took up the long Jump this season should be well pleased to reach a national final at her first attempt. The experience gained from competing at this level and observing other more experienced jumpers will help her in the future.

The very same lessons apply to Corey Molloy who competed for the first time in Hurdles at National Level. The only practice for the Club in this event is during the few winter training sessions at Athlone IT track so it is difficult to be competitive at National with such limited facilities.

All attention then turned to the track and as usual Longford AC was well represented in the 800m events. First up was Jack Gallagher in the U14 Boys 800m. The standard in this race as in all the 800m races was exceptionally high and Jack gave his all on the day in a race that started fast and continued at a break neck for the entire two laps. The early pace told on many of the athletes and the very warm conditions saw most of them collapse over the finish line. Jack ran a good race to finish 10th and will have learned a lot from this outing, his second national final in a row.

Longford AC had two competitors in the U15 Boys 800m race, a feat not lost on the commentator considering that this month commemorates the 35th anniversary of Ray Flynn’s Irish Mile Record set in Oslo. Joe Reilly and Christopher Conaty carried the Longford colours into battle and like the previous race, a blistering early pace was set. Both Longford athletes settled into the middle of the group but such was the pace that the group spread out quickly and they had to fight hard to maintain their positions. With 100m left, the two boys were engaged in a terrific battle for 7th and 8th positions with Christopher just pipping Joe on the line to replicate the finishing positions from a year previous.

Cian McPhillips was next up in the U16 Boys’ race. As in the previous races, the very best athletes from each province took to the start line. Cian positioned himself on the shoulder of the leader for the first lap and as the bell sounded, he was in the perfect position to respond to the move of the Munster Champion Tommy Connolly, Leevale AC. Over the final 300m the large crowd was treated to one of the best head to head, shoulder to shoulder duels of the day. The two lads were locked together until with 100m left to run, Cian unleashed his renowned finishing kick which took him five metres clear and he continued to hold that comfortable lead all the way to the finish line, in the time of 2:02.05. This gold was added to the All-Ireland Indoor gold he won in Athlone International Arena last April and makes him the undisputed Irish number one in the 800m event. It was deserved reward for the club that had been so well represented by its middle distance athletes on such a prestigious occasion and on such an historical month for the club with the 35th anniversary of Ray Flynn’s mile record. Cian now will turn his attention to the 1500m next week end where he will renew the rivalry with many of the same competitors.

Day 2 saw the Club’s sprinters going against the clock as well as Ryan Keogh in U12 Turbo Javelin and Paul Idahor, U15 Boys’ Long Jump. Full report on these events next week. See Club website www.longfordac.com for more details. 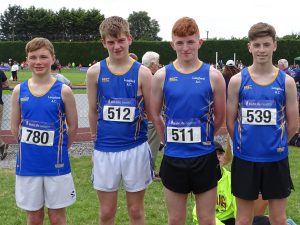 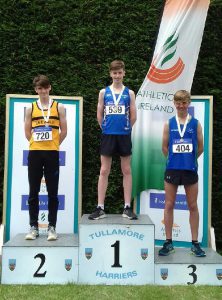 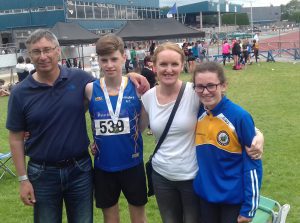