By createinteractiveSeptember 4, 2017January 25th, 2023No Comments

Day 3 of the Irish Life Health National Juvenile Track and Field Championships in Tullamore brought the curtain down on the T&F season for Longford AC. After the highs of the heroics in the National Indoors in Athlone last April, there was a realistic expectation that those heroics could be repeated again in the outdoors in Tullamore. In the end a medal haul of one gold and one silver medal was a disappointing return for the club but there was enough evidence of individual improvement to suggest that more medals can be won in the future.

The final day started with the heats of the 200m and the club were very well represented with athletes qualified to run in four different age groups. Christopher Conaty was first up in the U15 boys 200m. His time of 27.01 was very respectable but just missed out on a place in the final eight by coming in 9th overall. Christopher thus brought a very successful season to an end with the highlight being a 4th place finish in the indoor 800m and a silver medal in the 4X200m relay. Next up was Killian Rawle another member of that silver medal winning relay team. His time of 24.64 seconds was once again just shy of qualifying for the U16 Boys final but Killian has continued to make very good progress this season and now knows what needs to be done to take that final step up to the finals. Gospel Idahor ran a fantastic heat in the U17 girls 200m and qualified automatically for the final. While her run in the final was a little disappointing, Gospel has come on in leaps and bounds and appeared in four national finals in the same season harvesting a wealth of experience and knowledge and she has a new awareness that the podium is not very far off. The final club representative in the 200m was Nelvin Appiah who came into the race as the Indoor U17 Boys 200m Champion but also recovering from an injury picked up in the previous couple of weeks. The old sparkle was back as he recorded a comfortable 2nd place in his heat to easily qualify for the final. The break in training however cost him precious tenths of seconds in the final and on this occasion he had to be happy with a 4th place finish. However this was a great year for Nelvin with an individual gold medal and a relay team silver medal to add to his collection.

Next up were the two 1500m representatives, Joe Reilly and Cian Mc Phillips. Joe competed in the U15 boys 1500m having finished a very commendable 8th place in the 800m the previous week. This race was run at a manic pace from the gun and all plans and tactics went out the window as survival was what most competitors were thinking of coming into the final lap. In the end Joe ran a strong last lap but found the early pace had caused general carnage throughout the field with most athletes collapsing across the finish line. This was again a good learning experience for Joe and the upcoming cross country season will give him an opportunity to work on his endurance for next season. The final Longford competitor was Cian Mc Phillips in the U16 boys 1500m. Unlike Joe’s race, the early laps in the U16 race were more tactical with athletes watching each other and working themselves into a good position for the final lap. In the end the race really exploded into life at the start of the final 400m lap. The bell sounded to Sean Donoghue Celtic DCH (Dublin) and Cian unleashing a serious injection of pace which immediately left the rest of the field floundering in their wake. This shoulder to shoulder battle was almost identical to the previous week where Cian had won the 800m title in similar circumstances. With 100m left to race, it was Donoghue who got his shoulder in front and held on to win with Cian having to settle for the silver medal. While he was disappointed it was still a great championships for him with a gold and silver medal in his two events to add to the gold in the indoors and a silver in the U16 4X200m relay. That brought the T&F season to a conclusion for the club with the only remaining event being the Celtic Games in Morton Stadium in August where Cian Mc Phillips will represent Ireland in the 800m event. 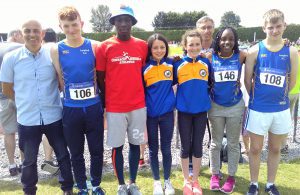 Coaches Donal Mulligan and Paddy McPhillips with some of the Longford Athletics Club competitors in 200m and 1500m events on Day 3 of the Irish Life Health National Juvenile Outdoor Track & Field Championships 2017 at Tullamore. Pictured during the afternoon break are Christopher Conaty, Nelvin Appiah, Rachel Mulligan, Sarah McPhillips, Gospel Idahor and Joe Reilly, missing from the photo are Cian McPhillips and Killian Rawle.