Well done to the five juveniles that travelled to Tullamore to compete in the National ‘B’ Track & Field Championships last Saturday. This competition is for improvers that want gain more experience competing at National level. It is only open to juveniles in the U12-16 age group who competed at Provincial level but did not place in the top 4. The opportunity to further practice some of the finer technical points such as setting up starting blocks can be a benefit to this up and coming group of young athletes.

Sian Gallagher came home with two new personal bests in both U12 Girls 600m, 2:05.91 minutes and 3.15m in long jump both noticeable improvements from the Connacht Outdoor Championship in early June.  Newcomer Shane Burke also achieved a new pb, 12.53 seconds, in the U14 Boys 80m sprint in his first outing at National level.

Joseph Carrigy and Eoin Kiernan were on the track for middle distance in the Boys U13 600m and U14 800m. Although both were disappointed they have a much better idea of the pace and stamina required and will hopefully apply this in their efforts for cross country in the autumn.  The standard at the National ‘B’ competition is always very demanding especially at the end to the season when athletes are relaxing on their summer holidays.

Sarah McPhillips ran well in the U14 Girls 80m sprint heats, 11.84 seconds, but did not progress from this stage. As there were four heats for this age group, only one place is guaranteed to each heat winner along with the next 4 fastest overall times. So many times Sarah would be the next one selected as she misses by just a fraction of a millisecond. She had a similar fate at the long jump pit as she came 4th out of 13 jumpers and achieved a great new pb but narrowly missed the podium by 0.07m. The sprint\long jump combination is definitely be the most popular event choices in nearly every age group so it always maintains the highest level of competitiveness.

This event marks the end of the track and field season for this year. When weekly training resumes in September the focus will be on preparation for cross country and building up fitness over the coming months. 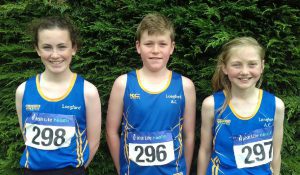 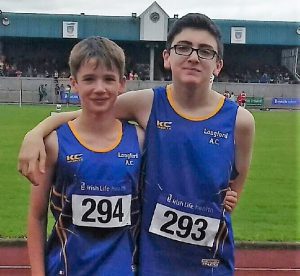 Eoin Kiernan and Joseph Carrigy, Longford AC, were on the track in middle distance races at Tullamore Harriers Arena for the National ‘B’ Track and Field Championships on 15th July 2017.