By Wp AdminFebruary 2, 2017No Comments

The first National athletics event of the year saw two of Longford Athletic Club’s multi-eventers take to the International Arena at AIT for a long day of competition in the pentathlon. Brendan Finnan, U15, improved his overall ranking from last year’s performances and Nelvin Appiah was on the podium to receive Bronze as he moved into the Youth age category for U17 and 18 athletes.

Notable on the day for Brendan was two new personal bests with his 2nd place finish in the 800m, 2.29.58 minutes, and 4th place in Long Jump, 4.40m. He put those together with 6th in Shot Putt, 6.55m, 5th in hurdles, 10.83 seconds, and 3rd in High Jump, 1.39m, to finish 5th place overall on a total of 1957 points.  He was satisfied with the day’s results as he showed continued improvement from both of last year’s 7th place overall ranking. Brendan has scope to improve in both Hurdles and Long Jump giving him time to work on those before competing again in the Outdoor Combined Events in May.

Nelvin showed genuine concentration throughout the five event programme and finished an impressive 3rd place, especially as he is very young in the two year Youth category. The entrance list included three athletes that competed on the Irish schools’ team in the prestigious SIAB Schools International Combined Events in December and this turned out to be the overall winners list at the end of the day.

Highlights of the event for Nelvin were two 2nd place finishes in both High Jump, 1.84m, and in a new event for him, the 1000m, 2.59.70 minutes, as well as continued improvement in hurdles, 9.3 seconds. As this was Nelvin’s fourth Combined Events competition in as many months he wanted to up his game, bringing more speed and force to both Long Jump and Shot Putt.  Both technical events need a lot of practice to nail the finer points and he was disappointed with two faults in each to finish 7th place in Long Jump, 4.77m, and 4thplace in Shot Putt, 10.52m.

Points are assigned for each event calculated down to the fraction of a second making it crucial to perform well across all five disciplines.  A total score of 3003 points earned Nelvin his first National medal of 2017 and he sees the challenges ahead as he aims for improvement in both schools and club athletics.

The winning did not end on Saturday as the U14 Boys, Christopher Conaty, Joe Reilly, Darren O’Neill and Brendan Finnan ran in the National Juvenile Cross Country Relays on Sunday. From the start they took off in the top 3 and stayed there throughout to win the Bronze set of medals out of 11 teams. 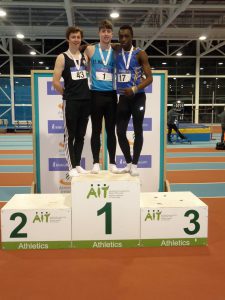 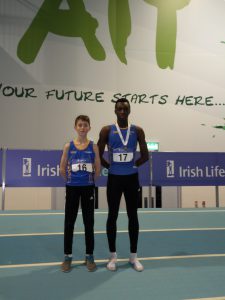 Longford AC juvenile athletes Brendan Finnan and Nelvin Appiah were in action at the Athlone IT International Arena in the first National Athletics Ireland event of 2017. Both put in a very long day competing in the Combined Events pentathlon with Brendan finishing on 5th place in U15 Boys and Nelvin winning Bronze as he moves into the Youth category for U17 & 18 age group.