Longford AC juveniles finished off the season in great style with Cian Mc Phillips winning the Irish Life Health Under 15 All Ireland Cross Country Championships held on Sunday last in Dundalk I T. Cian went into the race as Connaught Champion but such was the depth of talent in this age group that there were up to ten athletes capable of winning the Gold. Approximately 180 athletes had qualified for the final which made for a mad first 200 metres before the course narrowed. Cian got away well and positioned himself in the top five from the gun. By 1000 metres, the field had spread out and already it was obvious that the medals would be decided between about six athletes. By 1500m Cian was in a leading group of three and they had already established a lead of 10 or 15m over the rest. By 2000m, it was Cian and pre-race favourite, Connolly from the Cork City club, Leevale out in front with a good 30m lead. The key moment in the race came with 500m to go and as the two leaders approached a short sharp hill, Cian attached and Connolly had no response. From there Cian pulled away to the finish and ended up with a comfortable 50m gap by the line. After the individual medal presentation, better news was to follow as it was announced that Cian had led the Connaught team to a fantastic but very rare silver medal in the embedded Inter Provincial competition defeating the might of Munster and Leinster in the process. Cian has trained three times every week since August with this race in mind and great credit must go to his coach, Joe Ryan in Mullingar who had him in perfect condition when it mattered most.

In the preceding under 13 girls’ competition, Kate Hagan of Newtown was expected to be in contention at the front of the race after her silver medal in the Connaught Championships when she gave Emma Moore, the All Ireland Champion from Galway City Harriers a real good fright. Unfortunately Kate had been sick all week and the early pace of the race took its toll on her. There is no doubting Kate’s incredible endurance capacity and as the races get longer and conditions more challenging, Kate will unquestionably challenge for All Ireland medals in the future.

For now, the ‘muck warriors’ that make up the club’s cross country section can take a well-earned rest happy in the knowledge that the endurance they have built up in the last few months will stand to them in the indoor season which begins in January. 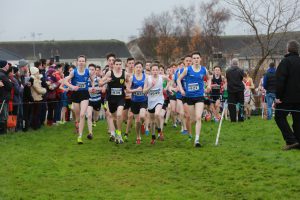 The starting line of the National Uneven Ages Cross Country Championship U15 race on Dec 11th, 2016 at Dundalk IT. 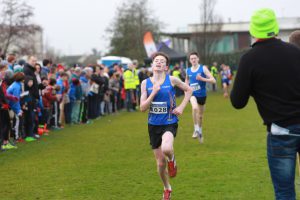 Cian McPhillips wins the Athletics Ireland National U15 Boys 3500m Cross Country with a clear lead at Dundalk IT on Dec 11, 2016. 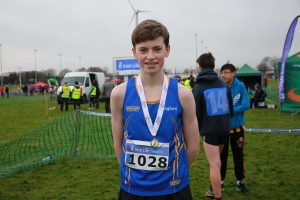