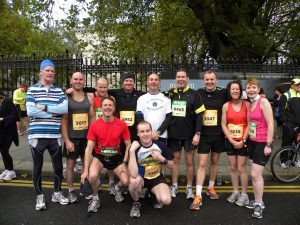 The Dublin City marathon took place on Monday 29th October which attracted a large number of runners; in fact over 14,000 entered and reflects the current boom in road running in Ireland.  Although the day was cool, there were some scorching hot performances on the day from the large number of athletes in the club who competed on the day.  First home was Lorcan Gearty who broke the magical 3 hour mark with a time of 2 hours 58 minutes and 18 seconds.  Lorcan ran a consistent race throughout and posted a fantastic time, well done Lorcan.  Next home was Paddy Sharkey who finished in 3-02.40.  First club lady home was Sinead Phelan in a time of 3-15.26 and 10th in her age category, what a fantastic performance and puts Sinead as a class performer over the classic distance.  Others to finish were Michael Maguire, Christy Ross, Gary Reilly, Peter Reilly, Michael Pilkington, Sean Crossan, Derek O’Neill, Emmet Barone sporting the new club running vest, Johanna Smith, Anne McDermott, Seamus Murtagh and Liam Fenelon.  These are the results to hand so apologies if I missed out on anyone.  Everyone at the club is proud of your performances and achievements on the day.