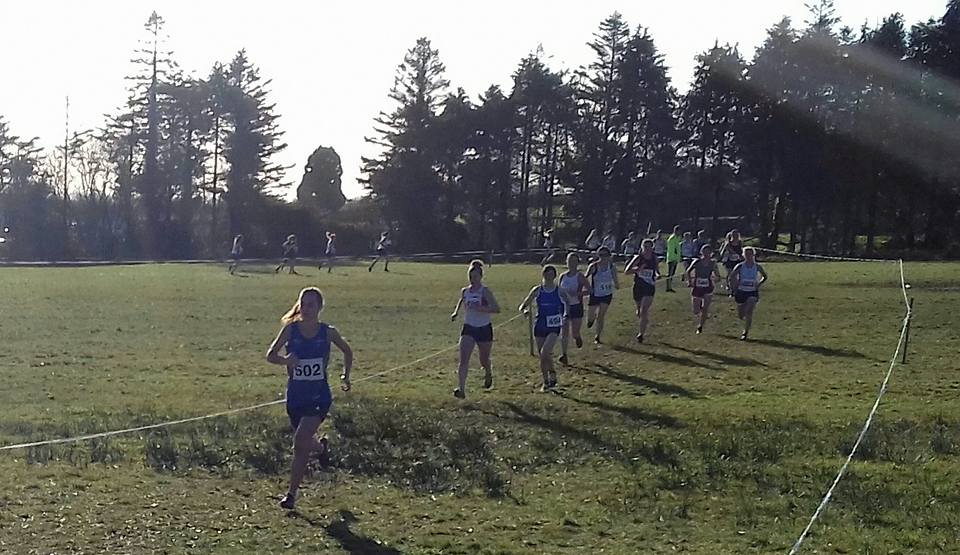 By Wp AdminNovember 5, 2017No Comments

Longford AC hosted the Connacht Juvenile Uneven Cross Country Championships and Senior race 2 on November 5th, 2017 on the grounds of Moyne Community School. Quite a bit of work went it to organising this event. Thank you to everybody that helped out. A special word of thanks to Moyne Community School and Club Chairman Paddy McPhillips for providing the venue and all the unseen work.

Longford AC had a small but dedicated number of athletes competing on the day. In the U11 girls 1500m both Rachel Keenan and Ciara Crossan ran with determination in what was one of the largest races of the day. Ciara battled all the way to finish well up in the field. Rachel who was running a year up in age got stronger as the race progressed,  passing other athletes to finish in an excellent 15th place just missing qualification to the All-Ireland finals.

James Hagan was Longford’s sole competitor in the very competitive U11 boys 1500m race. He had a super run to finish in 10th place and qualify for the national finals. James battled his heart out the whole way picking up places and was rewarded with his high finish.

Siog Reilly and Caoimhe Crossan worked well together throughout the U13 girls 2500m race and showed great drive and the spirit needed for tough XC racing. Siog was followed home by Caoimhe both well placed in what was another very competitive large race.

Last of the juveniles were Christopher Conaty and Joe Reilly who teamed up again in the U15 boys 3500m race. Both Christopher and Joe have had some trilling battles over the last couple of years particularly on the track over 800m with both taking turns getting the better of the other and sharing Connacht gold and silver medals. Both of the boys are multi-talented powerful sportsmen and give a lot of time and dedication to football and soccer as well. They both ran today having been focused on their other sports over the last while and having had matches today and yesterday. The competition was strong and the ground conditions were getting softer, with the lads showing great commitment and battled hard never letting up to finish mid pack.

Next up were the senior women. Adrianna Melia who has been in fine form lately and won Race 1 convincingly last weekend was again Longford’s only adult female participant. Adrianna again set out hard from the gun. In the early stages only Galway City Harrier’s Kathryn Casserly attempted to go with Adrianna. Kathryn a former US scholarship athlete at Providence College had easily won this Connacht race two years ago when it was last run in Moyne, a race Adrianna had to miss due to injury. Adrianna never let up and got stronger and stronger as the race progressed. Her lead continued to widen and coming into the home straight Adrianna had a very comfortable winning margin of over 100 meters to win Race 2.

Longford AC had a few more participants in the senior men’s race. Both Barry Sheil and Lorcan Geraty were out only a week after the Dublin City Marathon where both had great runs and Declan Newman was back after running Race 1 the previous week. Barry put himself in contention from the gun and ran with the leading small group of runners for the majority of the race and only dropped off coming into the last lap when the effects of the marathon might have begun to tell. He still managed to finish an excellent 4th overall. Declan Newman had a great run to finish in 16th place overall. Declan has been getting stronger over the past few weeks. He has the determination and focus needed to battle over a tough XC course. A special word of mention needs to go to Lorcan Greaty who came out for XC after the marathon last week. Lorcan ran with great experience, he set off conservatively knowing that others would wilt, which they did and he managed to pick up many places to finish in a very creditable 22nd place overall.

Cross Country racing seems to be at a low ebb, numbers are down. Positively more and more people are out challenging themselves running road races, park runs, triathlons and getting the health and social benefits. Why not give cross country a go? It is definitely a tough challenge. No watch or pace, every course is different and it can be a hard slog. It can be extremely testing but exciting near the front of the field, at the back it’s a dark difficult test against yourself and the other slow chap you recognise from the previous week that got you on the last lap, but not today!!. The things that go through your mind and self talk over the course of a half hour + and 8k of heavy muddy hilly ground where your legs become like lead and your lungs are going to burst should never be verbalised or shared. Why do it, well it’s magnificent. Resilience, determination, focus, heart, inner strength, outer strength, team spirit, and a great sense of satisfaction are some if not all of the things to be gained. Give it a go, you never know some day you might convince yourself you enjoy it.

U11 Girls race at the starting line, Connacht Uneven XC, Nov 2017 at Moyne

James Hagan having a great run in the U11 Boys Connacht Cross Country in Moyne, Nov 2017, finished 10th.

U15 Boys race at the Connacht Uneven Ages Cross Country, Nov 2017 at Moyne

Adrianna Melia out in front to win Senior Ladies category at the Connacht Womens Cross Country, Nov 2017 at Moyne