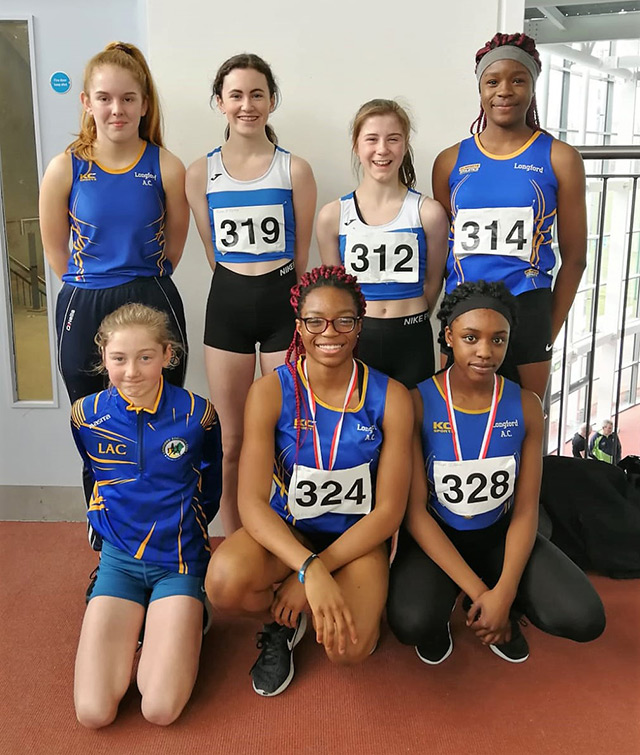 It was all about the speed on the second day of the Connacht Indoor Championships as Longford athletes ran away with gold in the 60m sprint in five age groups. Fastest out of the blocks was U18 athlete Killian Rawle at 7.45 seconds with U18 Adeyemi Talabi 7.75 sec, U19 Gospel Idahor 7.88 sec, U15 Funmi Talabi 8.02 sec and U16 Sarah McPhillips 8.29 sec all sharing the limelight with first place podium finishes and many new personal best times. 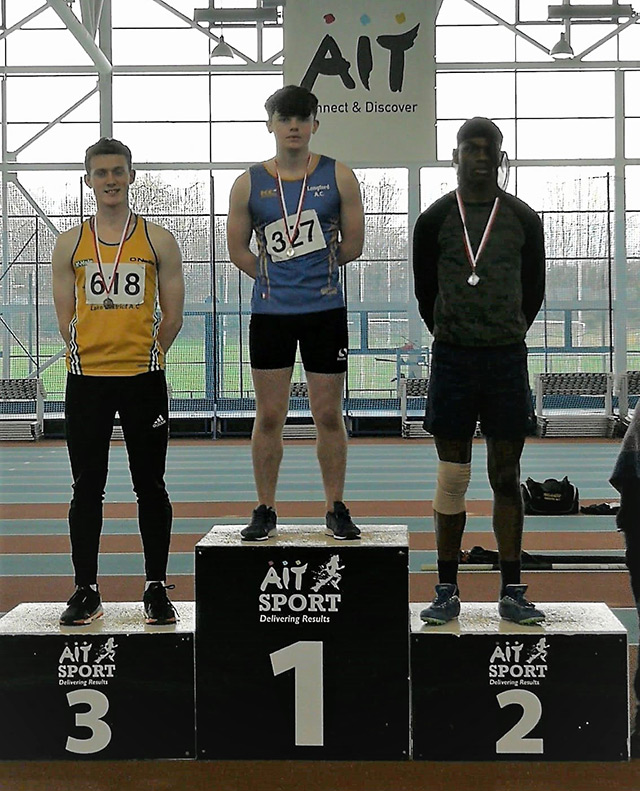 There was also success in the 200m with Gospel Idahor winning her second gold medal of the day and both Killian Rawle and Sarah McPhillips securing silver in this distance. Paul Idahor rounded off the list of qualifiers with a bronze in the 60m and 4th place in 200m in U17 Boys.

Longford Athletics Club’s teenage girls were in action in sprint, middle distance and long jump on 24th February at Day 2 of the Connacht Indoors Championships at Athlone IT track. Siog Reilly, Sarah McPhillips, Kaela Brady, Funmi Talabi, Sian Gallagher, Yemi Talabi and Gospel Idahor were among the 600 athletes from six counties that took part in the provincial competition.

The Club’s middle distance runners were also in good form with Cian McPhillips taking gold in the U18 800m, Jack Gallagher won silver in U16 800m and Kate Hagan qualifying in both 800m and 1500m races. The Programme of Events is very full on Day 2, making it a challenge for juvenile athletes to balance their efforts when the various races are close together.

Nelvin Appiah was in action at the French Junior Championships in Lievin, France where he cleared the bar at 2.03m for a fantastic new personal best in Junior Men’s High Jump. This jump earned him 4th Place on countback where his results sheet showed clearances at five heights: 1.89m, 1.93m, 1.97m, 2.0m and 2.03m. 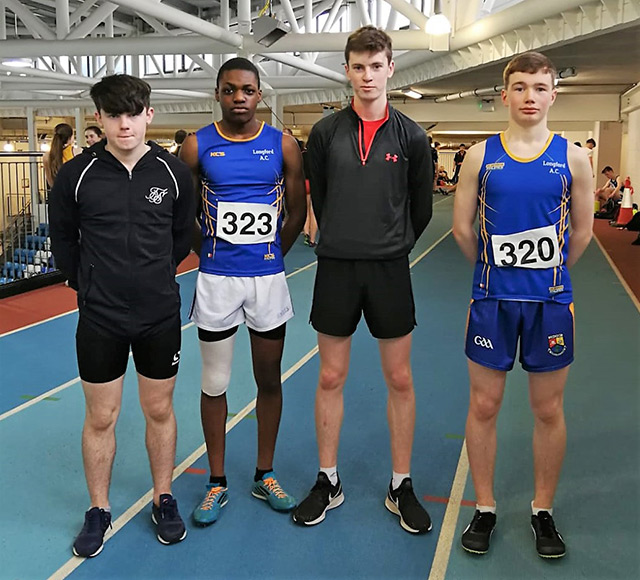 Adeyemi Talabi was the other double gold medallist for Longford when she jumped 5.04m to win U18 Girls Long Jump. This technical event requires a lot of consistency and the lack of facilities to train locally is a real hindrance for Yemi as she is attempting qualification for this summer’s U18 Europeans in Azerbaijan.

Another standout achievement on the day for Longford AC was their first competitor in the Senior Men’s Category at the provincial Indoor Championships. Aaron Kelly competed in two events and came away with a fifth place finish in the 200m and new pb at 24.29 seconds. Aaron, a first year student at Maynooth University, competed in both sprint and 200m at the recent Irish Universities Athletics Association (IUAA) Intervarsity Indoor Championships. 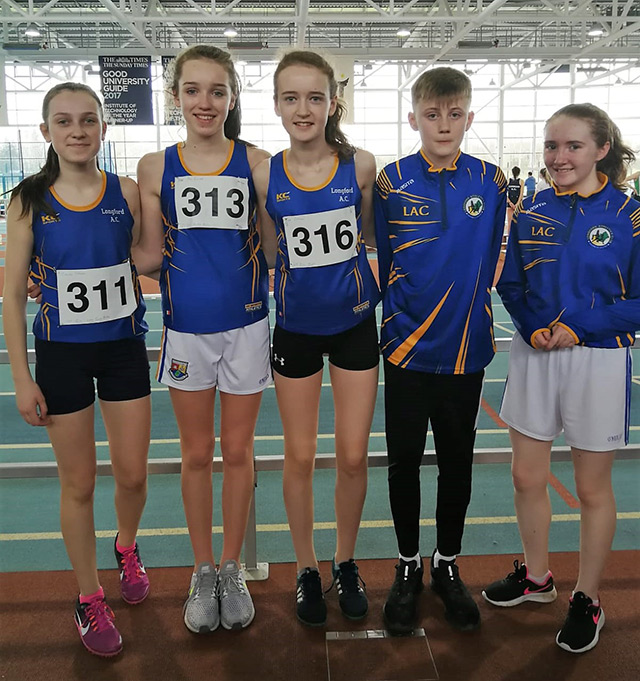 It was very disappointing that Longford did not put forward any boys relay teams this year in the U16-19 age groups after their National medal performances in 2016-2018. So the final event of the day left it all up to the girls, Funmi Talabi, Kaela Brady, Siog Reilly and Tara Crossan, to get across the line. They did not disappoint as they clocked 1:58.46 minutes in the U15 Girls 4x200m relay, winning the set of Connacht bronze team medals and earning their place at the All-Ireland Indoor Relay finals in early April.

The following Longford athletes will go forward to the Athletics Ireland National platform in 15 individual events and one girls’ relay team on three separate dates in March and April.