Even Ages, October 30th, South Park, Galway: 2 individual medallists -Silver in U16 Boys and Bronze in U14 Girls, as well as 1 set of team and County medals

Both Connacht cross country races were run over the midterm break. Overall there was a decline in the number of Longford AC juvenile taking part this season so it was all about quality versus quantity in each race.

Day 1 for Even Ages was held in glorious sunshine in Galway and saw Longford AC seniors Adrianna Melia, Paddy Sharkey and Declan Newman joining the line-up after the juvenile races were completed. Siog Reilly finished 39th in U12 Girls 2000m. Kate Hagan proved herself well running up 1 year to get an individual Bronze when she finished in 6th place in the U14 Girls 3000m. The U14 Boys were out in force and worked together to win a set of 3rd place County medals as well as 4th place as a club team with 69 points. Joe Reilly, 11th, Christopher Conaty, 14th, Aidan O’Boyle, 21st, Darren O’Neill, 23rd, Jack Gallagher running up 1 year finished 28th and James Galligan, 33rd. Cian McPhillips was running 1 year up and finished 2nd taking the Silver Provincial medal in the U16 Boys 4K race. All the medallists have qualified for the Athletics Ireland National Cross Country Championship that will be held on the brand new course at Abbotstown, Dublin on November 27th.

The wet and windy conditions in Westport on Day 2 were a real challenge for the Uneven Ages juveniles. Sian Gallagher, 14th, Jane O’Boyle, 28th, and Saidbh Nerney, 47th, all ran well in the U11 Girls 1500m. As they were only three they did not have enough to contend in the team or county rankings. Kate Hagan was in top form and won Silver with a very determined run throughout the 2500m race.  Karen O’Boyle finished 33rd. Cian McPhillips won the U15 Boys 3500m. Kate and Cian ran one weekend in both their own age groups and again on the other weekend in the year above. As they were medallists at both events they also go forward for the Athletics Ireland National Cross Country Championship for juvenile even ages on December 11th at Dundalk IT. 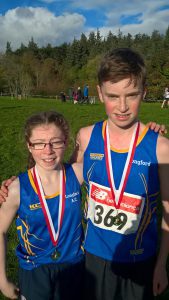