Cian Mc Phillips showed impressive form when winning the Boys Under 12 600 meters at the National Athletics (Woodies D.I.Y. National Juvenile Track & Field) Finals held in glorious weather conditions at the Tullamore Harriers Stadium on Sunday 07th July.  Cian brought some serious form into this final as current National Indoor Champion over the same distance back in March and a strong cross country season which resulted in a bronze medal last December.  Cian was the qualifying fastest provincial champion entering these finals and there were high expectations of a least a medal on this occasion, only the colour was to be determined.  No amount of good form and preparation can be used to give the final race position as the race has to be run and the best athlete on the day wins.  With warm calm conditions, the race was set up to be run in ideal conditions.  Straight from the start, a quick pace developed as some of the competing athletes already know of Cain’s sprinting finish and the only way to counteract this is to have a fast pace throughout. Cian took up third position controlling every move as athletes jostled for position.  It was clear to everyone present at the track as the race went through the 200 meter mark; Cian was in control and watching events around him.  With just under 300 meters to go, Cian hit the front and put in a strong injection of pace to pull clear of the field and dominate the race to the finish. Again with just over 100 meters to go he upped the pace again so much so that he was well clear of the second athlete and probably one of the most impressive winners on the day.  It was great for those present from Longford to hear the words over the public address system “that there was a winner from Longford, the first in many years”.  Cain’s time was 1 min 39.85 seconds.  To put this time in context, Cian would have won the bronze medal in the under 13 boys equivalent event such was his quick time. No doubt we will see more of Cian in the coming years.  The club had three athletes competing in the sprint championships on the Saturday with mixed fortunes. Adeyemi Talabi ran in the under 12 girl’s 80 meters heats and ran an excellent race just missing out on a place in the National Final.  This was a great occasion for Adeyemi to compete at the highest level and she improved on her form from the Connaught Championships.  Daire McManus brought form in the Under 12 boys 80 meters having won the silver medal at the National Indoor Championships.  Daire easily won his heat and was one of the most impressive qualifiers for the final.  However Daire picked up an ankle injury before the final and while he ran well in the final, he finished fifth.  No doubt, had Daire been injury free, he would have medalled.  Although he was disappointed, Daire will be back again and we have no doubt competing at the highest level.  Our final competitor was Thomas Mc Gann who competed in the Under 16 boys 100 meters.  Thomas finished third in his heat and qualified for the National Final.  He ran a competitive race in the final, however this was no to be Thomas’s day.  Competing in the National Final is an excellent achievement and Thomas has had a great season to date. All the club athletes over the weekend put in some great performances. Congratulations and well done. 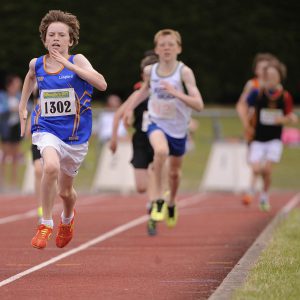 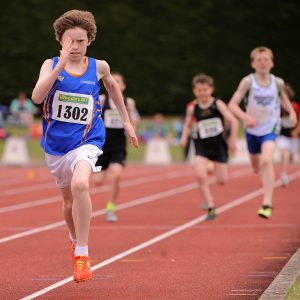