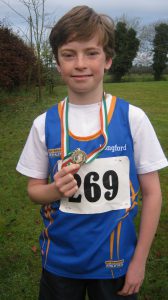 Congratulations to Cian Mc Phillips who won the Connaught under 11 boys cross country title with an outstanding performance in Galway on Sunday 18th November on a beautiful day for running.  The race was over 1500 meters on a challenging course which had good underfoot conditions despite the recent wet weather.  From the race start Cian was always in control taking up a commanding position in the lead group and never outside the top two runners. When Cian went to the front, he mad a decisive break and got clear of the second athlete and never looked like been caught.  He finished strongly and had one of the largest winning margins of victory on the day.  This continues Cians rich vein of form where he has already won the Connaught Primary Schools and County Longford Primary Schools Cross Country events. The club had two other athletes competing in this race, Brendan Finnan ran a strong race and continues to improve with each run and Daniel Hayden who competed at this level for the first time and can be satisfied with his performance. The club had 2 girls competing in the under 13 girls race, Sarah Sloane ran her heart out in running one of her best races in recent years and showed great determination on this occasion.  Dearbhaile Rooney finished one position behind Sarah full of running and is improving all the time. Our final competitor on the day was Mary Sloane who ran in the under 15 girls 3,500 meters race.  As usual Mary ran a strong race and gave it her all in a race which had a very high level of competition. Mary was unfortunate not to qualify on the day but she has an All Ireland final to look forward to at the end of November. The club would like to thank the parents who travelled to Galway and the level of support for the athletes.