Cian Mc Phillips set a new Irish record of 1minute 36.47 seconds on his way to winning the Boys Under 13 600m National title in Tullamore Stadium on Saturday last. This was the classic gun to tape run, with Cian taking the lead from the start and never looking in any trouble as the rest of the field fought it out for the minor medal positions. This is Cian’s fifth national title and he now turns his attention to the cross country season where he will defend his National cross country title in December.

Sarah Murphy running in her first National Outdoor track final also put in a fantastic performance to claim fifth place in the girls under 13 600m making it a great day for Longford AC in the middle distance events. Sarah’s time of 1 minute 47.21 was a new personal best knocking 2 seconds off her previous best time which is a giant step forward and marks her out as one to watch in the future.

Brendan Finnan competed earlier in the day in the boys under 12 High Jump. This was the third different national event final that Brendan had competed in this summer adding to the long jump and a great fifth place finish in the Turbo Javelin final. He was disappointed with his high jump performance going out a full 10 centimetres below his personal best height but in such a technical event, with numerous different components, it is easy to get it wrong on the day. Brendan is a great all round athlete and will continue to win medals and represent the club with distinction in the years to come.

The final Longford AC competitor in the outdoor track season was Niall Nerney who ran a steady race in the under 18 boys 3000m and finished in a time of 10 minutes exactly which equates to 3.3 minutes per kilometre and all 5k runners will know just how fast that pace is.

Thus concluded the outdoor season for Longford AC juveniles: a season of many new personal bests, the largest haul ever of Connaught medals, a couple of agonising near misses in National Finals and eventually a National gold medal and a new Irish 600m record. It began in June with our youngest competitors in the National finals in the girls under 11 60m; Sarah Mc Phillips and Aideen Mulligan, and girls under 11 500m; Fumni Talabi and Anna Hayden doing the club proud and continued into July when the under 13 boys 4 X 100m relay team missed a national medal by five hundredths of a second. The following week end Daire Mc Manus missed a national medal by seven hundredths of a second in the boys under 13 80m and Brendan Finnan came fifth in the Turbo Javelin. Finally Cian Mc Phillips and Sarah Murphy delivered memorable performances in the 600m to see Longford AC finish the track season on a high. Attention will now turn to the cross country events but monthly indoor training in international arena in Athlone I T will see athletes getting ready for the indoors next year. 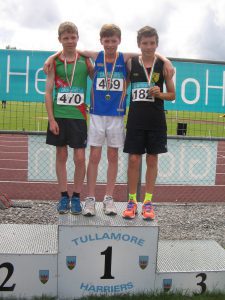 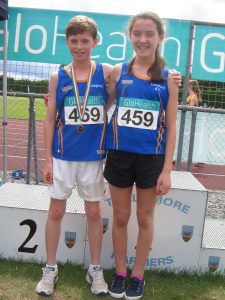