By Wp AdminNovember 4, 2019No Comments

It was great achievement for the Club to see two of our Senior members recognised at the Longford People of the Year Awards gala dinner dance on October 11th. The annual event sponsored by Kiernan Structural Steel raises much needed funds for Midland’s Simon Community working with the homeless.

Barry Sheil and Niamh Kiernan pictured with Chairman of Longford County Council Micheal Carrigy as they receive their award at the Longford People of the Year Awards, October 2019

The 10 nominees from across the County reflect the sporting and community involvement over the past year and included Bishop Emeritus, Colm O’Reilly, photographer Lalin Swaris and the All-Ireland champions Longford ladies U16 and minor teams.

Barry Sheil and Niamh Kiernan were honoured on the night for ‘historic first ever success for Longford’ winning both the men’s and women’s race at the Longford Marathon last August. 2019 was the 18th year of the Longford Marathon which was first organised in 2002 to mark the completion of Longford’s own Liam Fenelon’s 100th Marathon.

Barry started running competitively in cross country and track as a teenager at St. Mel’s College in the late 1990s. He drifted away from the sport in his twenties but returned to it over a decade later and he has been trying to make up for lost time ever since! 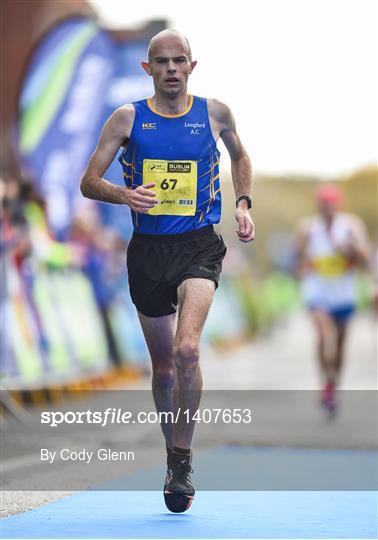 This year’s Longford Marathon was Barry’s target for 2019. He generally trains alone after work in Dublin and does his long run at weekends when he is in Longford. Barry realised after the first mile that he was in the lead and he kept his focus on his pace. The last 6 miles proved to be a real struggle, and although missing out on his time target, he was really delighted to be the winner of his hometown marathon this year.

Niamh has been running for ten years and joined Longford AC about 7 years ago. Joining the Club was one of the best things she has done as she has met great people and started to take her running more seriously by competing in races. 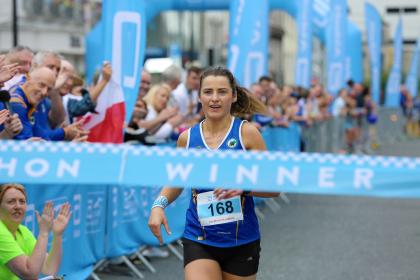 In July Niamh ran a great new 10 mile pb of 68:49 in Edenderry, shaving off over 3 minutes from her previous best and finished very well placed as 5th female in her age group.

With work and home commitments Niamh does her training early morning along the canal in Ballymahon. She is a regular on the Sunday morning long run regularly meeting up with several other Senior members to encourage each other.

There was a group of family and friends waiting to cheer for Niamh at the Longford finish line, so crossing the line was her main focus on the day. Running through the tape and winning the ladies race in a time of 3:12.32 was a definitely a dream come true and all the more special on home ground.

Although neither Barry or Niamh were running in the Dublin marathon this year training continues as a group is heading to Spain in February 2020 for the Seville Marathon in February. As Barry told me, “with a new target they will keep miles ‘ticking over’ during the winter months”.