The Athletics Ireland programme listed 188 teams from across the country in the U12-19 age groups that had earned their place on the starting line to compete for National titles. Pride of place is at stake as Clubs try to ensure they have the right combination of speed and experience in the team they select. As expected Leevale AC, Cork, dominated in the older age groups winning 3 sets of Gold in u17-18-19 Boys races.

After relay success over the last few years Longford had their hopes dashed in February at Connacht level when two of their fastest teams were disqualified for zone violations after batons were dropped during hand over exchanges. Recent injuries then forced the U19 Boys team to pull out only days before the final so Longford travelled to AIT with only 3 teams this year.

The U15 Girls 4X200m team of Sarah McPhillips, Avril Cosgrove, Kate Hagan, Funmi Talabi and Kaela Brady finished in 7th place overall. They were pipped at the post to lose their qualifying place by less than 0.5 of a second as three teams in their heat all finished simultaneously.

After last year’s Silver the U17 Boys team of Killian Rawle, Keelin McGann, Cian McPhillips, Christopher Conaty and Paul Idahor knew from experience they would need to save some reserve after competing in a tough heat. Going into the final with the third fastest time, 1:37.94 minute, they had to dig deep to find even a fraction of a second of more speed. The short turnaround time just didn’t allow enough recovery and after holding 3rd place from the start they were overtaken on the final bend with only 50 m to go, finishing just outside the medals in fourth place. This was a real disappointment for the lads on an otherwise flawless performance. 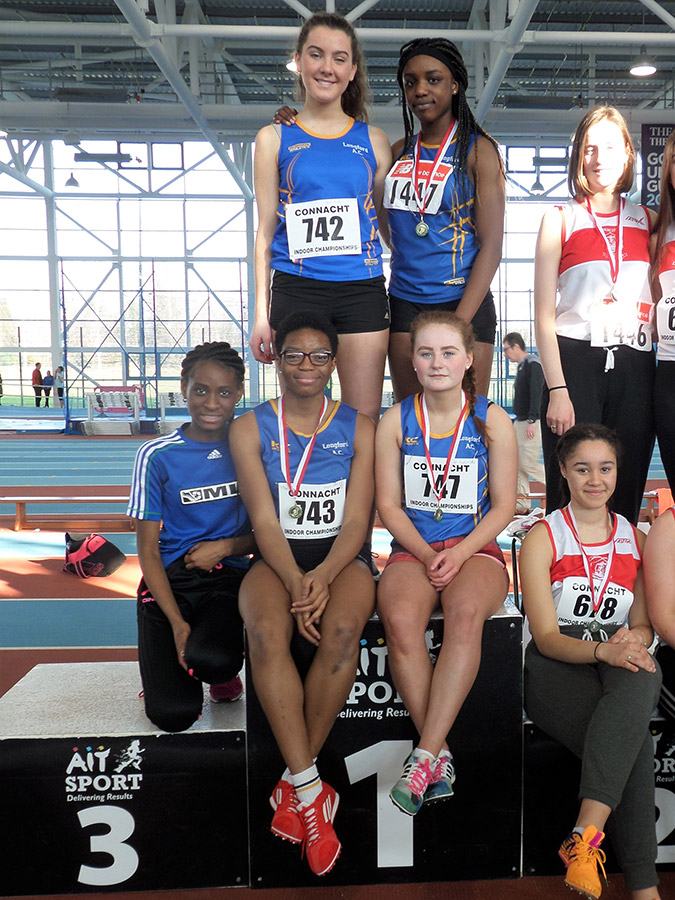 Longford AC U18 Girls Relay team on the podium at the Connacht Indoor Championships in February 2018 where they qualified for Nationals. Gospel Idahor, Yemi Talabi, Sarah Murphy, Teegan Murphy and Adora Omotola finished in 4th place at last weekend’s All-Ireland Relay finals, a mere 0.64 of a second from medal position.

The U18 Girls waited patiently for their turn in the afternoon session which turned out to be a straight final. Their race took the very same course as the boys’ earlier in the day as the girls firmly had 3rd place for the majority of their 4x200m race. Despite very strong individual performances they were also overtaken on the final stretch and finished fourth. Gospel Idahor, Yemi Talabi, Sarah Murphy, Teegan Murphy and Adora Omotola were ever so close to the podium with only 0.64 of a second separating them from bronze.

While All-Ireland Relay Day did not bring joy for any of Longford’s teams the Club had a very successful juvenile indoor season with sprinting success for sisters Yemi and Funmi Talabi, High Jump Silver for Nelvin Appiah and two new spectacular Championship records for Cian McPhillips and qualification to the European Athletics Youth Championships in Gyor, Hungary in July.