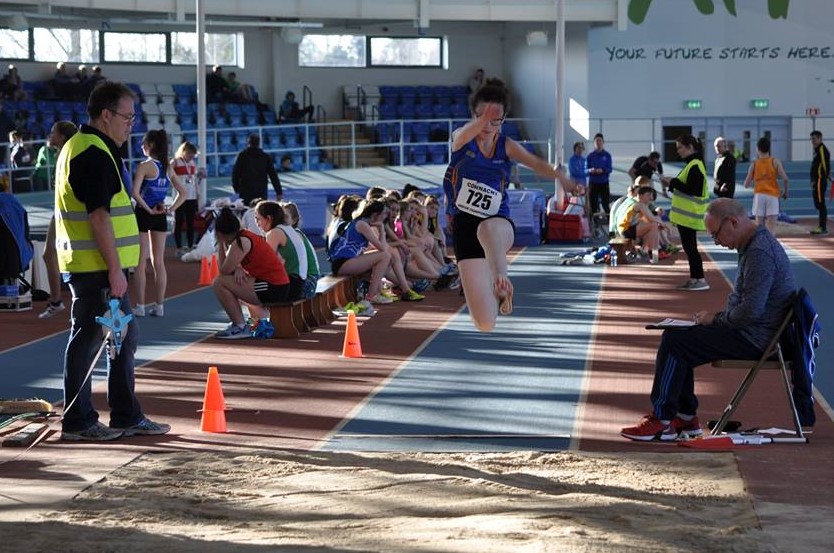 Nelvin Appiah, Longford Athletic Club, was rewarded for his performance last Saturday when he made it onto the All-Ireland podium to receive Silver in the U18 Boys High Jump at the Athletics Ireland National Juvenile Indoor Championships at Athlone IT.

Nelvin Appiah, Longford Athletic Club, on the podium to receive Silver in the U18 Boys High Jump at the Athletics Ireland National Juvenile Indoor Championships at Athlone IT on 7th April 2018. Pictured with 1st place Darragh Courtney, St. Brendan’s AC (Kerry) and 3rd place Lucas Moylan, Naas AC. All three athletes jumped 1.90m and the result was decided on countback.

A recent injury forced Nelvin to withdraw from the 200m finals two weeks previously which was all the more regrettable as his Connacht qualifying time had him extremely competitive for medal contention had he been fit to run in the final.

Nelvin’s focus and concentration on the day was evident as he attached each height with improved speed in his run up. He looked in very good form despite strapping his heel as he attempted to get a new pb. The technical finesse is within his grasp and he will surely reach his target 2m height in the near future.

In the end the result was decided on countback as all three medallists cleared 1.90m but none progressed after three attempts at the next height.

Nelvin is now looking forward to the outdoor track and field season and will have several opportunities with Schools and Connacht Athletics to compete in May and June.

Longford’s only other competitor on the day in individual events was Sarah McPhillips in U15 Girls Long Jump. Sarah has been working on her jumping technique since she competed last summer in the National Community Games. Although she did not replicate her best Connacht jump of 4.20m it was an opportunity for her to gain further experience at high standard competition level.