By Wp AdminDecember 8, 2015No Comments 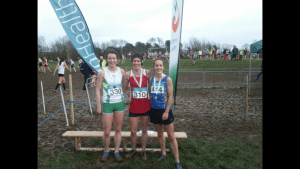 Well done Adrianna Melia 3rd place in the Athletics Ireland National Novice Cross Country Championships today. The pace was furious from the gun.  After about 500 meters Adrianna was in a leading group of four competitors that broke away from the large quality field.  .  Adrianna put in a tremendous finishing kick to secure 3rd place and almost catch the girl in second.  The national novice xc championships is probably the most competitive races each year. The winner today is returning following a period in the US on an Athletic scholarship.  The girl in second is last years national u/23 cross country champion.  This is the first time in at least 40 years,as long as I can remember,  that a senior athlete wearing  a Longford singlet has won a national medal at a Cross Country Championships.    Fantastic run Adrianna.