Longford A C sent a team of 13 athletes to the Connacht Track and Field Championships held in Sligo last weekend. Weather conditions were quite good with cloudy conditions eventually giving way to sunshine with a strong wind making conditions difficult in the middle and long distance races. This marathon competition started at 11am and continued until just shy of 8pm which left competitors, coaches, officials and parents drained. Longford got off to a great start with Niall Moran winning gold in the under 14 Long Jump. Yemi Talabi, Adam Shields also competed in the under 13 Long Jump while Dearbhaile Rooney was in the under 14 event. They all put in great performances in this technical event and can look forward to improved distances with more coaching in the future. Sprint hurdles is an event for adrenalin junkies where a crash or a fall leaves a lot more than a bruised ego. Kaitlyn Corcoran and the Parker boys, Peter and Martin represented Longford A C and while they did not win a medal they acquitted themselves very well and will no doubt be back for more. The sprinters in the club have become used to appearing in Connacht and National finals and once again they did not disappoint. Yemi Talabi won her heat of the under 13 girls in classic style and finished third overall for bronze, just a tenth of a second off gold. Kaitlyn Corcoran ran a fantastic race also but finished outside the medals. Daire Mc Manus and Cian Mc Phillips were next up for Longford in the boys under 13 80m sprint. Daire has a Connacht title and a national silver medal to his name already while Cian was trying his hand at sprinting for the first time. Seven hundreds of a second separated the first three runners but most importantly Daire had the gold and Cian had the bronze medal. This was a fantastic result for the two boys especially when they were competing against athletes from some of the best juvenile clubs in the country. Alanna Mulligan, Niall Moran, Peter Parker and Martin parker all competed in the 80m under 14 sprints and while running very well they missed out on the medals this time. Next up was the 200m sprints where Alanna Mulligan ran an excellent race and with a bit more experience would have been a medal contender. Niall Moran and the Parker boys already had a long day from 11am and by 6pm found the 200m pace a bit too strong for them. However they will have learned a lot from the experience and can be very proud of their achievements. The under 13 600m saw Sarah Murphy run a fantastically smart race to claim a silver medal and a new PB. She is improving with every race and can look forward to the All Ireland with lots of confidence. Adam shields and Cian Mc Phillips lined up for the under 13 boys 600m. Adam put in a great performance but just left himself too much to do in the final 100m to catch the leaders. He will have learned a good deal about race tactics from this experience and now knows that he is well fit to compete at this level. Cian Mc Phillips as the reigning champion was determined to see off the opposition and won the gold with seven seconds to spare over the field in a powerful display of front running and the fastest time in Ireland this year. Dearbhaile Rooney ran a steady tempo in her 800m under 14 race finishing in the top ten in a very fast race. Niall Nerney competed in the under 18 3000m picking up a bronze medal in a race where a strong head wind made racing conditions very difficult. The final race of the day for Longford was the under 13 boys relay and what a performance to finish. The team of Cian Mc Phillips, David Mc Donnell, Adam Shields and Daire Mc Manus absolutely blitzed the opposition running out easy winners and claiming a 4th gold medal for Longford on the day. The spread of the medals from long jump, sprinting and middle distance including 4 gold, a silver and 3 bronze made it a most successful Connacht Championship for Longford AC. 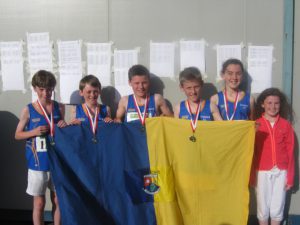