Nelvin Appiah, third year student at Moyne Community School and well known Longford AC juvenile, notched up four new personal best times/distances last Saturday representing Ireland in the Schools’ International Athletic Board Combined Events Championships against the best up and coming Under 16 athletes from England, Scotland and Wales.  His throw of 12.25m in Shot Putt, 5.99m Long Jump and shaving off 12 seconds on his 800m time were highlights from the long day of competition for Nelvin.

The five event indoor pentathlon included 60m Hurdles, Long Jump, 200m, Shot Putt and 800m with points allocated for each. It is such a pity that High Jump is not even included in the Boys Programme as Nelvin has excelled at high jump over the past year, earning his first international cap at The Celtic Games in Wales last August, winning Silver in U16 Boys High Jump.  After the first four events placings in the top 6 were very tight, with the English team slightly ahead, so it all came down to 800m.

As 2016 marks the centenary of Irish Schools Athletics this was the first time the SIAB held the prestigious International Schools Combined Events in Ireland. Team Ireland won two sets of Silver in Under 16 Boys and Over 16 Girls categories, with a Bronze for Over 16 Boys and 4th place finish for U16 Girls. The technical finesse of the England multi eventers was evident as they won Gold in all four age groups.

The opportunity to compete at international level has been a big learning experience not only for the athlete but coaches as well with praise to the time and enthusiasm that volunteers give to coaching from Little Athletics up. Nelvin’s achievements were on the same weekend as the Athletics Ireland National Uneven Ages Cross Country Championship which saw Cian McPhillips crowned National Champion in the U15 Boys 3500m in Dundalk. It was a fitting end to 2016 which will be remembered as the Longford Athletics Club’s most outstanding year of competition to date. 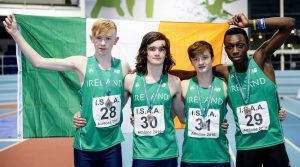 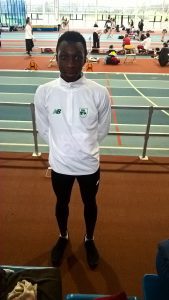 Nelvin Appiah togged out in his new official Ireland gear as he makes his 2nd international appearance with Irish Schools Athletics at the Combined Events at AIT International Arena on Dec 10th, 2016 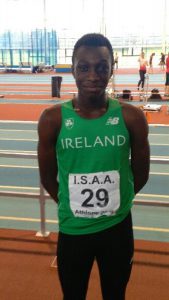